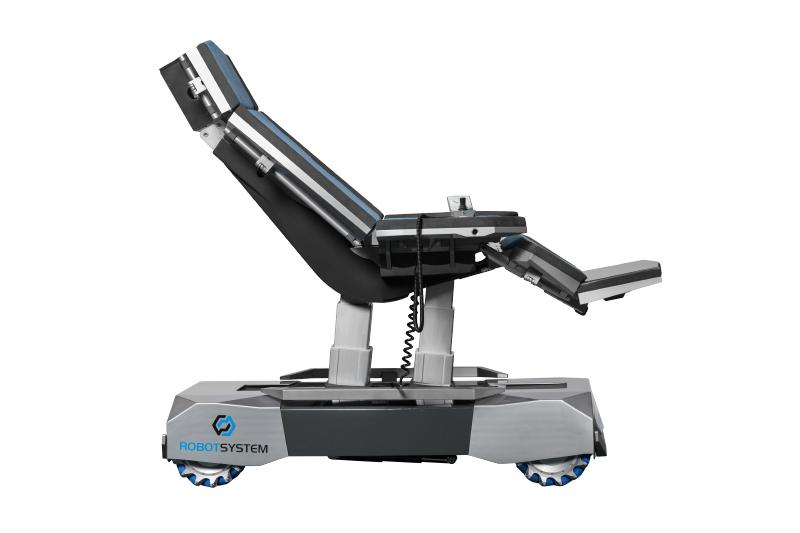 The robot technology is characterized by the ability to associate diametrically different transport and positioning functions in one robotic technology, with the ability of omnidirectional motion.

The user calls the robot in the position of horizontal bed, he/she transfers in the lying position to the robot modifiable area of bed, touches the control display to turn the bed position into the chair position; the bed becomes a comfortable chair with a centric passage through the door by automated tilting of the side modules and automated change of wheelbase of both axles. Simultaneously with the ability of the continuous positioning process between the end position bed and end position chair for rehabilitation purposes according to the specified positioning program. Simultaneously with the ability to verticalize the user to ensure personal self-service operations.

Lowering of the modifiable area is possible up to the level of the standard bed. This parameter of large-scale elevation changes facilitates entering and exiting of the user in both extreme positions bed – chair.

The modifiable bed uses omnidirectional wheels preferably which brings excellent maneuverability. The movement is characterized by a combination of the directions of movement in one and the same time, the possibility of acceleration, deceleration, cornering, turning on the spot around its own axis and riding oblique, directly to the side respectively – i.e. crab movement.

The user has available an ergonomic control with joystick and keyboard which can be positioned in the space of the armrest, or on the folding board which is arranged in the rear part of the head segment.

The control is variable - according to actual needs it can be used both central and remote control, including the option of automated movements using programmed software. This software allows to predefine a path of movement of the ROBOCOUCHAIR, as well as to preset parameters within the configuration of bed segments forming the desired position. A continuous programmable change of all angular positions of the individual positioning modules in the range of position bed- chair can proceed, using space-time programming process of positon transformation of the robot mechanisms in order to create a sequence of positioning assemblies particularly usable in controlled robot-assisted rehabilitation. Users can customize the functions of the device according to their current needs.